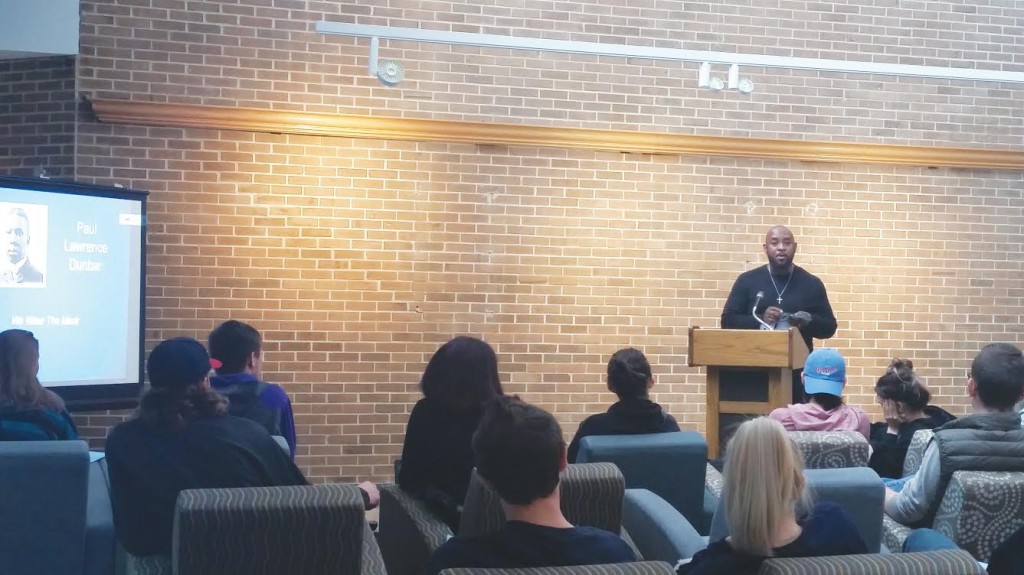 It is also an hour for students to learn about the poems and poets that influence their own professors and peers.

“I taught at a high school years ago and we did something like this. So I asked if people wanted to volunteer to read and they chose their own poems to share with students,” said Cindy Chanin, Associate Professor of English.

Chanin also recited a few passages during the Soul Food Luncheon two weeks ago. She said she has a passion for the culture and loves to participate in these events.

“It’s good to hear the perspective of others. Gwendolyn Brooks is my favorite poet. Not just among African American poets, but all poets in general. The poems speak to me even though I am not African American,” said Chanin.

Chanin also said that the poems are good because they are easy to identify as humans and they share a universal appeal.

“My favorite poem would have to be ‘Mother to Son’. I love the imagery, the symbolism and the encouragement,” added Chanin.

A total of 24 students of all diversities attended the lecture.

“I really enjoyed the lecture today. Langston Hughes has been one of my favorite poets for quite some time now, and I think his ideas and the feeling he put into his poems really resonates with people even to this day,” said Victoria Smith, a nursing major at Vol State.

Smith said she describes herself as someone who loves to learn history of all cultures and that the classes and diversity-themed events on campus have helped open her mind to so much more.

“Cindy Chanin recited ‘Mother to Son’ which is a poem about a mother comforting her son and not losing faith as an African American in the 20th century. Powerful subject, for sure,” said Smith.

Gaynell Payne, an English major at Vol State, works for the school’s public relations and volunteered to organize the PowerPoint slides for the event.

“I loved volunteering for this. Being involved with media is what I do and sometimes it feels like there’s never enough time to do it all!” said Payne.

“It’s like a skill set for me and I’m always busy with it,” added Payne.

Cindy Chanin coordinated all the poem readings in collaboration with other faculty members of the English and Communications departments.

Chanin said she hopes to have these events every year as it has helps open young minds to culture.