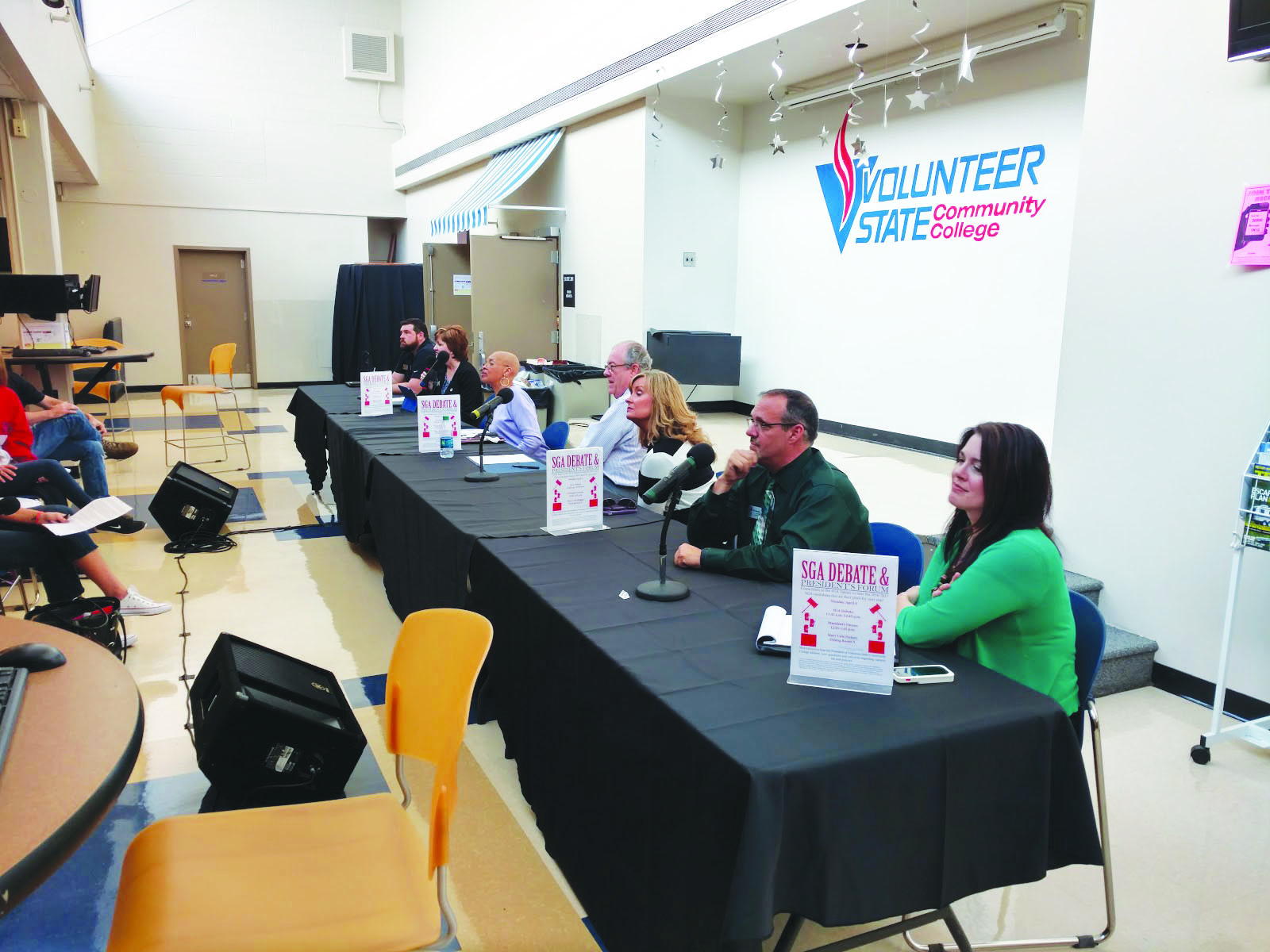 The meeting took place through virtual screens in attendees’ homes and offices this time around, as submitted questions regarding topics from the college’s upcoming projects to the ongoing changes to the school were asked.

The forum began at 11:15 a.m. and lasted until 12:45 p.m. At its height, 60 people were in attendance ranging from faculty and staff to students. Both Tabitha Sherrell, SGA Advisor, and Debera Bennett, SGA’s Attorney General, emceed the forum. Sherrel emceed the technical aspects of the virtual meeting, while Bennett emceed by asking the submitted questions.

A common scene in this forum, perhaps different from one’s before it, was seeing participants through virtual screens in their homes, living rooms, bedrooms and kitchens. Some opted for different scenery by changing their background to places they said would like to be. Faulkner placed himself in Tanzania, with zebras at at watering hole behind him, and others such as Beth Carpenter, Vice President of Business and Finance, pictured pristine beaches behind her.

The 27 questions asked during the hour and a half forum ranged from maintenance within the school and its equipment to suggested additions or projects to the school as well as in-progress projects. A common theme within the forum was questions regarding the ongoing changes to the school due to the current situation of COVID-19.

As all classes are online for the remainder of this semester as well as Summer and campus is effectively closed, many of the questions sought to look for clarification or further elaboration on the changes or plans going forward this situation has brought.

A significant topic brought up was the college’s plan to use the stimulus money it received from the Federal government in response to the current situation. Faulkner stated the college had done what it needed to access the funds of 2.3 million dollars given to the school. He explained the college is currently planning on how to use the funds. These plans he stated could change given the guidelines on how to use the money by the Department of Education.

Faulkner stated that a portion of the money will be allocated on a one on one basis to help students during the crisis. He explained students will have to apply for this portion. He continued by saying students will receive a dispersed amount in their bank accounts or mail in the Spring and Fall Semester. Although 2.3 million seems like a lot, stated Faulkner, it would be dispersed among roughly 6,000 students in the Fall and in the Spring. Either way, Faulkner stated he hopes this will help students during this time to pay whatever bills or necessities they need.

Another prominent topic was accessibility for students to online learning.

One of the questions asked about accessibility to labs during this time or in the future to which Dr. George Pimentel, Vice President of Academic Affairs, responded by saying the college is looking to alternative ways for students to have access to labs either by sending lab kits to their homes, having lab videos uploaded by instructors or by having smaller labs with fewer people to allow students to come in while adhering to social distancing. Pimentel also suggested that if this is not possible, some classes which are dependent on physical lab presence may not be offered for the time being. At any rate, Pimentel said one could always go to Disability Services if he or she has any questions over this.

Beth Carpenter responded to a question regarding books and how students can rent and return them in the current situation. Carpenter explained that students can still rent and buy books online. She continued by saying that the company Follet, the company behind most of the nation’s colleges’ books, is coordinating how to best approach this situation. She explained that the company is working with Fedex to allow students to print shipping labels and return books that way.

One question asked about laptops being provided to students in need of them to which Carpenter responded that the school plans to provide laptops for longer periods of time and that the school had just placed in an order for more Chromebooks.

Several other questions fell along these lines. One asked if online fees would increase or remain if the college continued to be fully online come the Fall semester to which Faulkner explained these fees would be waived if that were to happen.

Another asked about the balance of students’ WEPA accounts, the college’s printing service that has money allocated to students so they can have access to printing, given all classes are now online to which Carpenter responded that there are current negotiations with WEPA to ensure the college gets its money’s worth.

An impromptu question from an attendee asked if there was any way to prevent her son from losing his pell grant in the wake of the changes. She explained her son, due to his disabilities, was having difficulty with the change to online courses and wondered if there was a way from him not to lose his pell grant because of this. Her question was then answered by explaining one could appeal if this were the case as COVID-19 is a reasonable excuse for cases like hers and each case would be dealt with on a case-to-case basis.

Other questions asked about areas dedicated to breastfeeding, maintenance of fitness equipment located outside, improvements on the Gallatin campus’ walking trail, adding dryers and washers on campus for those students in need of them and other suggested additions to the college.

Published in home, News and The Latest Issue