(Pictured: Maryam Flagg poses in front of a herd of bison at Yellowstone National Park.  Photo courtesy of Maryam Flagg.)

Maryam Flagg, Instructor of Biology, has been shooting animals all over campus for the last two years.

That is, shooting pictures of animals using undercover infrared cameras.

Flagg was sent to a field methods workshop in August of 2014 to Canandaigua, New York, where she learned how to use the cameras used to take pictures of and identify the animals.

Vol State, in addition to CCURI, purchased some of these cameras for the research.

The cameras have been set up on the outskirts of campus for the past two years near the stream and the softball field.

Coyotes, deer and raccoons are only a few of the animals seen on camera, which

use an infrared flash and motion sensors in order to capture the images.

Flagg and some of her students go out and secure the cameras to the trees with chains and padlocks.

“The cameras can be set out for a month and survive any sort of weather. They’re kind of like the ones the hunters use,” Flagg said.

Flagg asked some students from her class if they would help her set them up.

“We can get a thousand pictures of deer over the weekend. There’s a raccoon party at 3 a.m.,” Flagg said with a laugh.

Three of Flagg’s students have done full research projects. One of them analyzed every animal in the data and the times the animals showed up.

“We found the peak time was at 3 a.m.,” Flagg said, and that they were surprised by the amount of diversity found in the results.

They found in one study that deer typically stuck to the edges of campus, especially by the stream.

Flagg used cat food as bait in order to lure a coyote near the stream.

Groundhogs were also the subject of one study, a student having crawled into the bushes in order to find the groundhogs.

“Anyone who is interested can do it,” said Flagg. 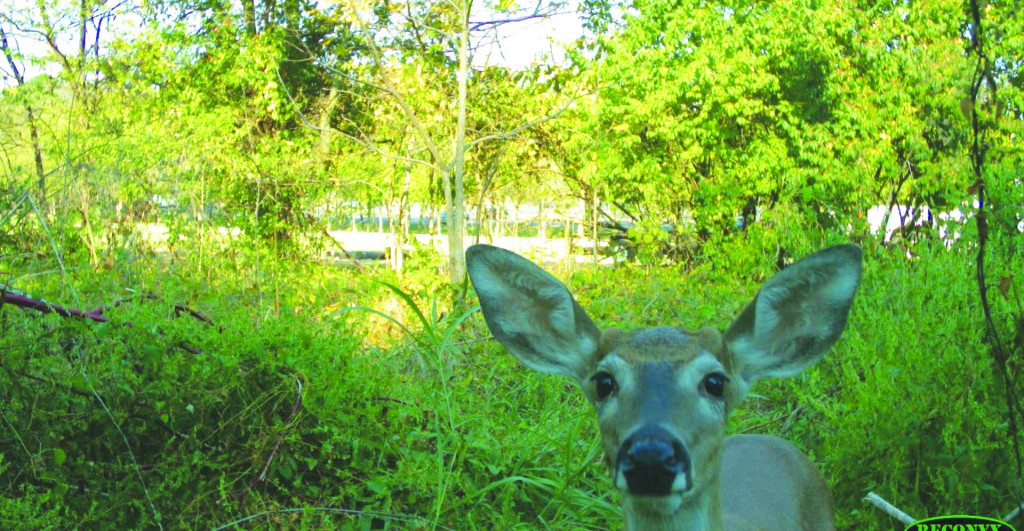 (Pictured: One of the deer roaming Vol State gets curious about the wildlife camera.  Photo courtesy of Maryam Flagg.)

She now gets her classes involved with using the cameras.

“We have three cameras set up in Springfield campus and some in Highland Crest campus,” said Flagg.

Students are going to compare the results between all Vol State campuses to see the diversity of wildlife.

CCURI has created a network of 20-30 community colleges, which collaborate with one another in the research process.

Within the last three years CCURI has sent Flagg and her students to New York, South Carolina and Wyoming for further training and poster sessions.

Poster sessions are opportunities for students to show the results of various projects they have been working on all over the country.

Vol State will be hosting a national poster session for CCURI in April, Flagg said, and that CCURI will be providing travel scholarships to students who are participating.

Flagg said it looks great for students transferring to universities, and looks great on a resume in general.

“It’s fun and a lot more hands-on. They get to learn about the animal communities in their environment,” Flagg said.

Flagg wanted to add that she thanks Vol State for supporting the research and the students who had participated in the project thus far.