Patty Powell to retire this semester 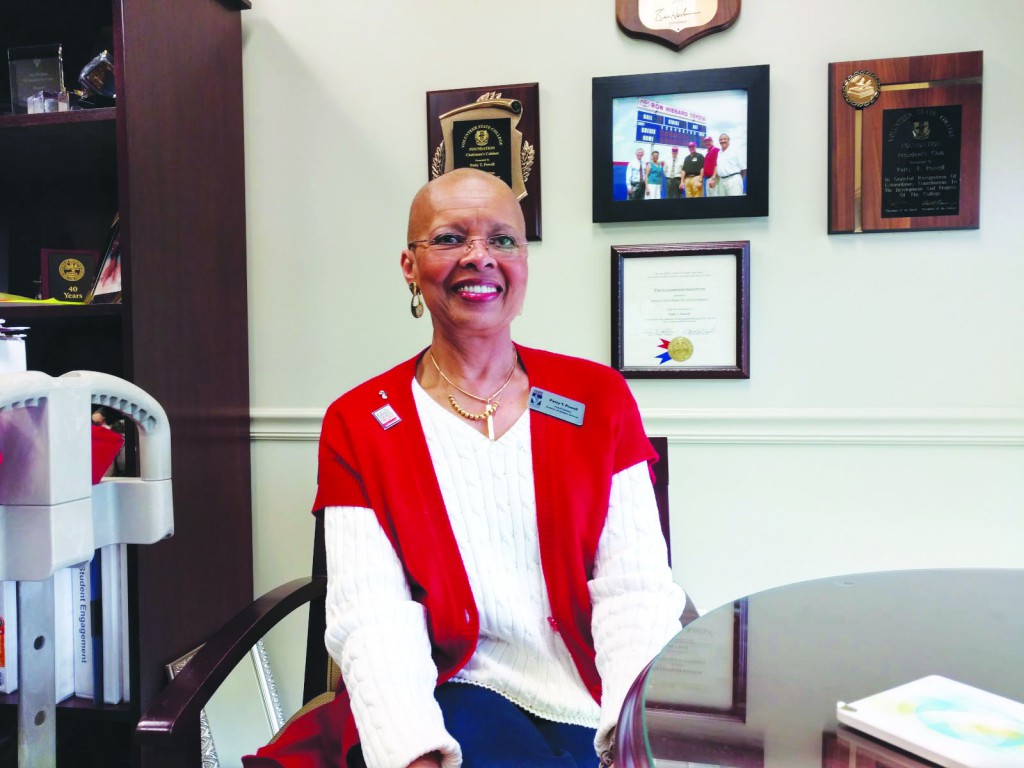 (Pictured: Patty Howell in her office.  Picture by: Blake Bouza.)

This Friday, April 15, she retires and ends her 45-year career in higher education.

Before that she worked in counseling for University of Memphis, where her first bit of advice to students would be, “first, find the bathrooms and take it a step at a time from there.”

Speaking to Patty Powell is like stepping from a chilled shadow into warm summer sun.

“I never aspired to be in charge of anybody. I always liked to be the person who worked behind the scenes to make my boss look good,” Powell, who has worked under all three presidents of the school so far, said humbly.

A first generation college student, Powell attended the University of Memphis back in 1963, where she began as a music major and glee club member before she became a student worker in the records office.

“My boss was just wonderful,” she said. “I got a lot of experience early on. I’ve just never really had any negative experience in my adult life that has really been bad. It’s made my life as an administrator much more positive.”

Powell and her roommate were two of the first African-American women to integrate in a non-segregated dormitory at University of Memphis.

“It was a great experience. I learned a lot about people and about culture. It was all positive,” she said.

At Vol State, Powell said, “we have people from everywhere, of all different cultures. It’s no longer just black and white. People in Japan can take online classes from Vol State. Technology has opened doors. There’s no reason a person can’t get a college education now.”

Powell said she believes that people get what they give, and was reminded of this when at her retirement party.

“There were people from everywhere. I’ve never done things looking for anything in return. I’ve done things because my parents raised me by the golden rule: you treat people the way you want to be treated.”

Powell said that she lives by this golden rule about respecting other people.

“We have to learn to adapt without negotiating our own beliefs,” she said.

Powell is a Christian, and she acknowledged that people she interacts with regularly may not be.

“I’m not going to try and convert you. I’m going to live in a way that, hopefully, you like what you see. You may or may not convert. I can only be me, and you can only be you. And it goes back to my one little word: respect,” said Powell.

Powell has had a hand in getting Degree Works started, the online program students can use at any time to help plan out their academic career. It will give an outline of the classes a student needs to take for his or her major.

“I think it’s time,” Powell said of her retirement.

“I am richly blessed to still be alive and to tell my story,” Powell said. “Cancer is not always a death sentence. The Lord has allowed me to stay here for a little while longer, so He’s got something else for me to do.”

Powell had a brother who was hit in the face with a bat for dancing with a white woman. As a child, she herself could not enter many establishments from anywhere but the back door.

“I don’t like to see people mistreated,” said Powell.

The legacy Powell said she would like to leave at Vol State is that she wants everyone treated fairly, as she has always tried to treat people.

“In my role, I serve as vice president of students, all students. Everything that has ever happened to me has helped mold me. I wouldn’t change anything about my life,” said Powell.

“I don’t care what color you are, just act right,” Powell said with a smile.

Powell said that it has been a time of reflection for her.

“This is all I have ever done for 45 years of my life. I feel richly blessed that I’ve been able to work with such wonderful people. That includes my staff, my colleagues and my students. I’ve just met so many beautiful people in my life time.”

“I say, this is the best division on this campus,” Powell said while laughing.

“My parents were really good people. They raised me right. And I’m just grateful for that. The Lord brought me to a place where people accepted me.”